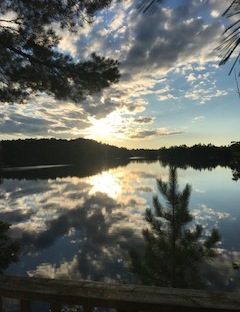 Accepting that some things will never change, I intended for this to be my final post. Because I so want closure to this story, I thought to conclude Swenny and Cher by offering a preview of what’s to come.

Swenny will continue drinking and I will continue to search for evidence. When confronted, he will deny having any part of purchasing, hiding, or drinking the bottles I hold. Eventually, he will confess, with a promise that his latest drink was his last. For the next week, he’ll rise early to exercise, attend meetings and make the most of each day. The following week, he’ll attend fewer meetings and eventually they’ll be erased from his calendar. Soon, we’ll settle into our familiar pattern and within weeks, the scent of relapse will be in the air.

Within a few months, his drinking will escalate to the point where I will question why I stay, knowing that I could never leave. His struggle is mine, and we will face it together.

Due for a relapse, I’m becoming impatient for a full-blown drinking episode. It has been less than one month, but I already feel it’s coming. He’s too relaxed, acting as if he deserves to be here in the comfort of his home and family. When conversations seemingly take place around him, I feel he is insulted. When the time is right, I’ll remind him that he was initially included but because he chose not to participate, we continued without him.

My anticipation is high because his latest relapse fell nearly on top of those that occurred earlier this summer. Following a weekend away with some favorite girlfriends, I returned home to a Swenny I hardly recognized. He was unshaven, disheveled and fighting to start a lawnmower while standing unbalanced in grass needing to be cut. A hug hello revealed he had been drinking, so I took my bags inside to collect myself before confronting him. Because I was holding no bottles, he denied he was intoxicated, wondering why I would even ask.

In that moment, facing Swenny my husband, all I could see was Swenny the alcoholic. And it was like I was seeing him for the very first time. Long gray stubble covered his face,  and his hair was wild and out of place. Centering his expression were glassy eyes that eluded mine as he looked down and continued to pull the cord of a mower that simply would not start. There, in the caricature of a drunk I found upon my arrival home, he stood: Swenny my husband…Swenny my alcoholic.

Days later in a moment of sobriety, he acknowledged that relapse. Miscalculating how much he drank that morning, he said he was unable to sober-up before I returned home. It won’t happen again.

Now nestled in the calm following this recent storm, I find myself waiting for him to drink. Not for the sake of catching him, but because another relapse holds opportunity to do something. To abide by the promises I have made to myself, our children and to him. As I consider the possibilities of a sober house, an in-patient rehab facility we cannot afford, or a separation to understand all that is at stake, I wait – for the scent of vodka, for a conversation forgotten or a bottle carelessly tossed.

The other night, I thought my chance had arrived. I heard the backdoor open. After it closed shut, I went on our airing porch to see what he was doing. Searching the perimeter of our yard, I looked down to see him tossing his head back repeatedly, and hurriedly, as if to empty a bottle before being noticed.

My reaction was physical. My heart sank, my hands shook and my mouth went dry. Sick, I looked again to see instead a tall vine swaying in the wind. It’s flowers were bobbing up and down in a cadence that might match the head of an alcoholic secretly swigging drinks in the dark of the night. A sight that until revealed in my mind that night, I had never before witnessed.

The false alarm left me shaken and facing the hardest question of all: “What exactly is it you are looking for?”  The answer remains at large. I hope that through future posts it is found.

Sela is not your typical business theme. Vibrant, bold, and clean, with lots of space for large images, it’s a perfect canvas to tell your company’s story.
Sela is responsive, which means it adapts to any screen, providing your visitors with a great browsing experience on any device.